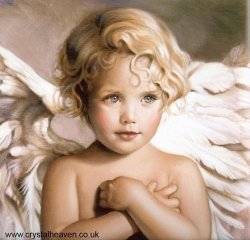 Angels are Beings of Light from the 7th dimension and higher. The angelic realms come from the heart of the Divine and do not have free will as we do. Their will is the divine will.

We cannot usually see or hear them because they vibrate at a frequency that is beyond our visual and auditory range. Certain people can connect with them because they are psychic and can tune into the angelic waveband. Others have to learn to do this. 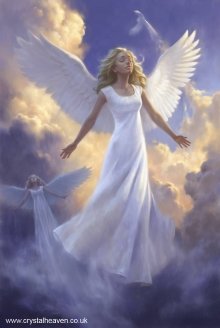 The angels of the 7th dimension are your Guardian Angels and others who help humans. Every single person has a Guardian Angel who protects and looks after them. Your Guardian Angel keeps the divine blueprint for your life, which you agreed before you were born, and they whispers guidance to you to keep you on your chosen spiritual path. Usually we think the whispered guidance of angels is our own inspired thoughts or bright ideas!

If your soul has agreed that you need an experience illness or accident for your spiritual growth or even if it is time for you to pass over, your Guardian Angel must step aside. No one can contravene the free will of your soul. However, if this is not the case, your Guardian Angel will step in and help you. Remember to say ‘Thank you’.

Your Guardian Angel and Guides also arrange for you to meet the people you are meant to meet, such as a partner or good friend – even an enemy who challenges and strengthens you. Your Guardian Angel organises all co-incidences and synchronicities.

The spiritual law is ‘ask and you shall receive’. Your angel is always listening and if you ask for help (and it is for the highest good) they will assist you. Angels must wait until you ask because you have free will.

Your angels will help you to be safe, to find a parking space, to reach your destination at the correct time, to find something, to heal a relationship and many other things.

Your Guardian Angel is always by your side if you need them. They may leave you for a few moments if they are on a mission for you. For example, they may flash off to fetch some pure energy for you from a waterfall or the moon. They may go to speak to another Guardian Angel on your behalf to bring about a better relationship.

Your Guardian Angel loves you and nothing can stop them from loving you whatever you do. 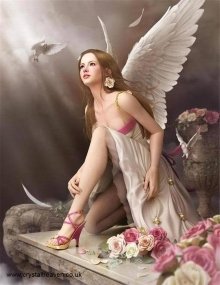 If you want to communicate with angels, think, read or talk about them for this helps you to be on their wave length. Change your expectations. Most people do not hear a voice or see a golden being. Angels usually communicate telepathically, so you have to learn to differentiate between your thoughts and their messages.

As people become more clairvoyant they start to see the light of the angels but this does not always happen. Most people just sense their presence or know they are there. So start your communication by knowing they are with you. Then talk or think to them and trust the angelic thoughts that drop into your head in response. They will always be positive and good.

The Nine Choirs of Angels 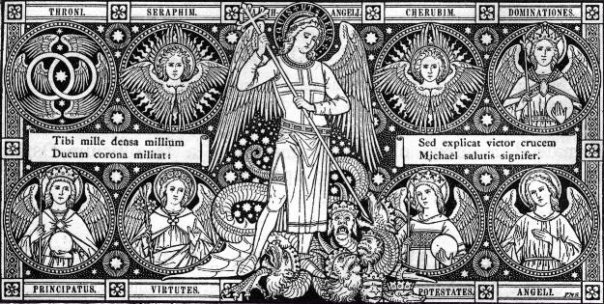 Seraphim: Angels of love, the name means fiery or burning ones. They have six wings, the same as the days of creation. Most are involved in singing- this is not just to praise the Divine but to keep the vibrations of love and light eternally flowing through the universe.

Cherubim: Angels of harmony, the name means full of knowledge. They are the mighty and majestic keepers of the Celestial Records, and are the first angels mentioned in the Bible as the guardians of the Garden of Eden. They represent the Wisdom of the Divine and their task is to make sure the Universal Laws are kept.

Thrones: Angels of Justice who see the divine justice is done in all situations. They are peacemakers who dispense the justice and power of the Divine, the Angelic Court in charge of the Cosmos.

Dominions: Angels of Wisdom through whom the majesty of the Divine is manifested. They are responsible for the governing of angelic duties an all the spiritual and physical worlds and to ensure that everything in the universe moves in accordance with the universal laws. The law of perfect cause and effect flows through them into the universe.

Virtues: Angels of Movement who work miracles on earth and look after the heroes of the world and those who champion good. They are also Angels of Choice.

Powers: Spirits of form who provide the universe with its physical form. Their task is to look after the Divine Plan and are guardians of the passageways leading to Heaven. They record the history of Mankind, helping to bring balance to the Earth, and are guides for lost souls.

Principalities: Angels of Personality and Time who look after planet Earth, and who are Guardian Angels for her countries and cities. They influence humans through the ideas and circumstances they create.

Archangels: Angels of fire who carry the Divines most decrees to humans, Gabriel’s annunciation to Mary and his dictation of the Koran to Mohammed. They are the angels mentioned most in the Bible, although only four are named, Raphael, Gabriel, Michael, Uriel. Four are also mentioned in the Koran, Gabriel, Michael, Azrael and Israfel. There are thought to be seven Great Archangels and the Book of Revelation describes seven standing before the Divine. Learn more about the 15 Archangels including their colours and associated crystals/gemstones.

Angels: Spirits of Nature whose name means messenger. They are the ones who work most closely with humans and are linked between the Divine and Humanity. Angels are the experts we call on for help in particular situations, from the devas who look after the natural world and can help us in the garden, to angels of healing who help us when we are feeling unwell and all areas in between, and of course there are our Guardian Angels whose special task is to look after us and keep us safe.

Our Angelic Reiki Courses – View information on our Angelic Reiki workshops from beginner to practitioner level. Courses run regularly across the UK and occasionally in Europe and the USA.

Return to ‘All About…’ Section