Merlin is one of the most fascinating figures in the Arthurian legend. Merlin is a man of mystery and magic; contradiction and controversy surrounded his life.

Merlin wore many hats: he was a wizard or sorcerer, a prophet, a bard, an adviser and a tutor. He appeared as a young boy with no father. He appeared as an old, wise man, freely giving his wisdom to four successive British kings. Merlin was the last of the druid, the Celtic shaman, priest of nature, and keeper of knowledge, he was great at manifesting for all to do good.

Many scholars were puzzled over his birth, his magical power, his prophetic gifts and his mysterious yet often conflicting fate. He is believed to be a great Ascended master and was St Germaine in a previous existence.

This spray will bring in his Magic and aid in the Manifesting of all your dreams, but be careful what you wish for. 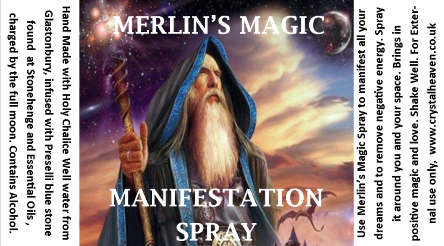