In ancient Egypt, polished Carnelian crystal was a favorite contrast with Onyx and Lapis Lazuli used in collars and necklaces designed for royalty. The ancient Romans were also known to use large Carnelian stones set in gold for men and women’s rings. Because of its hardness of 7, the Carnelian crystal stone was also carved into cameo rings that depicted personal emblems or figures of gods, a popular fashion trend in second century CE.

Calling on Carnelian for its incredible healing powers is nothing new. In the middle ages, healers believed in Carnelian crystal healing properties and used it to help ease the tension and stress of Viking marauders sacking villages and other drawbacks to living in the dark ages. Featured in a variety of shades ranging from orange and red to brown, use this ‘worry stone’ to bring out your childlike playfulness and spontaneity with its warm and sunny vibes.

Besides its striking aesthetic, the Carnelian crystal stone meaning represents the hot cauldron of the lower three chakras. It’s associated with taking bold action with its hot and fiery spirit that stimulates the root chakra, helping circulate vital energy to your center, which contains your deepest sexual desires and powerful creative instincts. Whenever you’re called on to perform, whether it’s in between the sheets with your lover or a creative performance on the stage, be the star of your own show with by accessing the healing properties of Carnelian, the fiery companion guiding you in facing your fears. Keep Carnelian by your side either as jewelry or as a stone in your purse or pocket and put plans into action with confidence.

Gearing up for an interview or audition? Bring carnelian with you and get ready for opportunity to rock, even if you’re sweating bullets from extreme stress. Popular among actors and actresses, Carnelian brings out hidden talents by creating harmony between mental focus and creativity in the melding of the right and left parts of the brain. 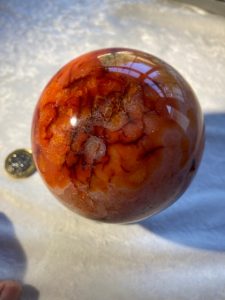 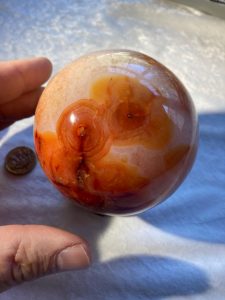 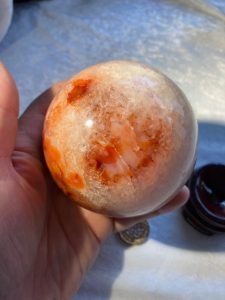